The biting pain of injustice strikes and all seems lost.

Words do not seem to be enough in expressing the pain or changing minds and hearts about the current state of our judicial system, but silence breeds further injustice.  What is left to say or do?

Can we take to the streets non-violently and flip our nation similar to that of the Egyptian Revolution in 2011?  When is enough, enough? And when do the voices calling out for truth and justice turn the ears of those who have become deaf to the cries of a people?

Before you go and Google search how many white people have been murdered by black police officers (yes, I’ve witnessed someone post that during this past week on Facebook) and before you bring up how white people suffer evictions, lay offs and low wages … just stop.

This isn’t the Oppression Olympics.  This isn’t a cause to compare and contrast.  That diminishes the validity of the lives of those who have been treated unjustly, disrespectfully and inhumane.  For a moment, I ask that we all put aside the narrative of our own struggle to recognize, acknowledge and understand that we absolutely live in a society that not only suffers from racism, but it is explicitly and implicitly promoted and advocated for.

Put down your guard and open to compassion.  Sit down and listen with an intent to understand, empathize and be stirred up to fight for rights and lives that are being stripped of specific groups of people.

I am only one person.  But you and I together would make two.  And where two or three are gathered in His name, He is there.  What if our two multiplied and became 10, 100, 1,000, 10,000?  What if we raised our voices in protest of injustice rather than arguing our point of view?  In the end, our perspective and polished argument will not resurrect the lives of the men and women that have suffered death as a continuing result of our silence on a violent, rampant racism our society denies, or worse, celebrates and defends. 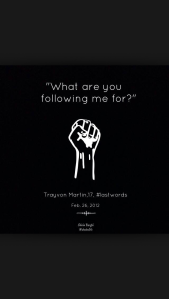 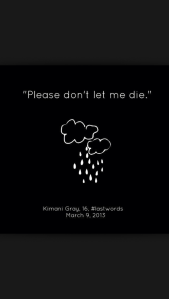 (Images created by Shirin Barghi and published on goodmenproject.com)

In this situation, I challenge all of us to risk being wrong, to humble ourselves and open ourselves up to the fact that the experiences we live are not the experiences of everyone. I ask that you recognize that just because it does not or has not happened to you, that does not mean it does not happen consistently and just as unbelievably as these experiences are described.  I challenge us all to give up being heard and listen to those who have had that stripped from them generation after generation.  I challenge all of us to take up more than just a cause.  I beseech you, brothers and sisters, to recognize the attack on the lives and souls of the many who have been minimized to statistics.  This is not an “us” against “them”, this is all of us standing up against the dark powers that rule this world, but do not fear, have peace, Christ has overcome the world.

Let us stand together in victory.

“Behold! My Servant whom I uphold, My Elect One in whom My soul delights! I have put My Spirit upon Him; He will bring forth justice to the Gentiles. He will not cry out, nor raise His voice, nor cause His voice to be heard in the street. A bruised reed He will not break, and smoking flax He will not quench; He will bring forth justice for truth. He will not fail or be discouraged, till He has established justice in the earth; and the coastlands shall wait for His law. Thus says God the Lord, who created the heavens and stretched them out, who spread forth the earth and that which comes from it, who gives breath to the people on it, and spirit to those who walk on it: I, the Lord, have called You in righteousness, And will hold Your hand; I will keep You and give You as a covenant to the people, as a light to the Gentiles, to open blind eyes, to bring out prisoners from the prison, those who sit in darkness from the prison house. I am the Lord, that is My name; And my glory I will not give to another, nor my praise to carved images. Behold, the former things have come to pass, and new things I declare; before they spring forth I tell you of them.”

This site uses Akismet to reduce spam. Learn how your comment data is processed.